• This does NOT APPLY to my 'Pro Plus' 'Home Plus' or 'LTSC Plus' Builds. All of my 'Plus' Builds have full Windows Features and Support, and have no issues with Optional Features and Languages. If You are having issues adding languages to my Super Lite Builds, even after following this guide, I HIGHLY Recommend you try installing one of my 'PLUS' Builds instead, that have full support, and no issues adding Languages and Speech.

• Adding an additional language pack, and setting it as your system language is possible in my Super Lite (Pro Gamer) builds, but requires a step by step procedure to work properly, which I've outlined in most of my newer threads, but just in case there are still members who are struggling to get their primary language installed and set in my builds, I'd like to share this video following my step by step instructions that are outlined in my 'Language Pack Issues' Spoiler that's found in my threads.


• Hopefully this video helps you guys, and at least shows that it can work without issue if done this way.

• YOU WILL ALSO NEED TO INSTALL THESE FONTS HERE TO FIX MISSING CHARACTERS!:

You must be registered for see links

• Good luck everyone, I'll post the instructions here again as well.
Just as an FYI, the build I'm using in this video is
You must be registered for see links
. 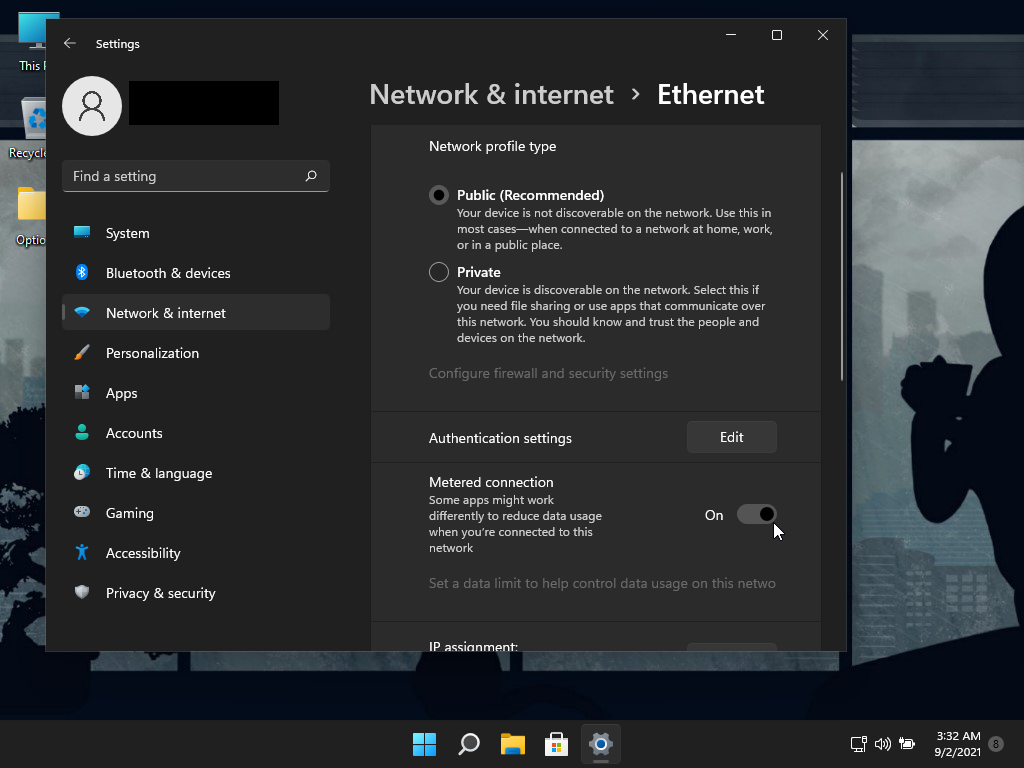 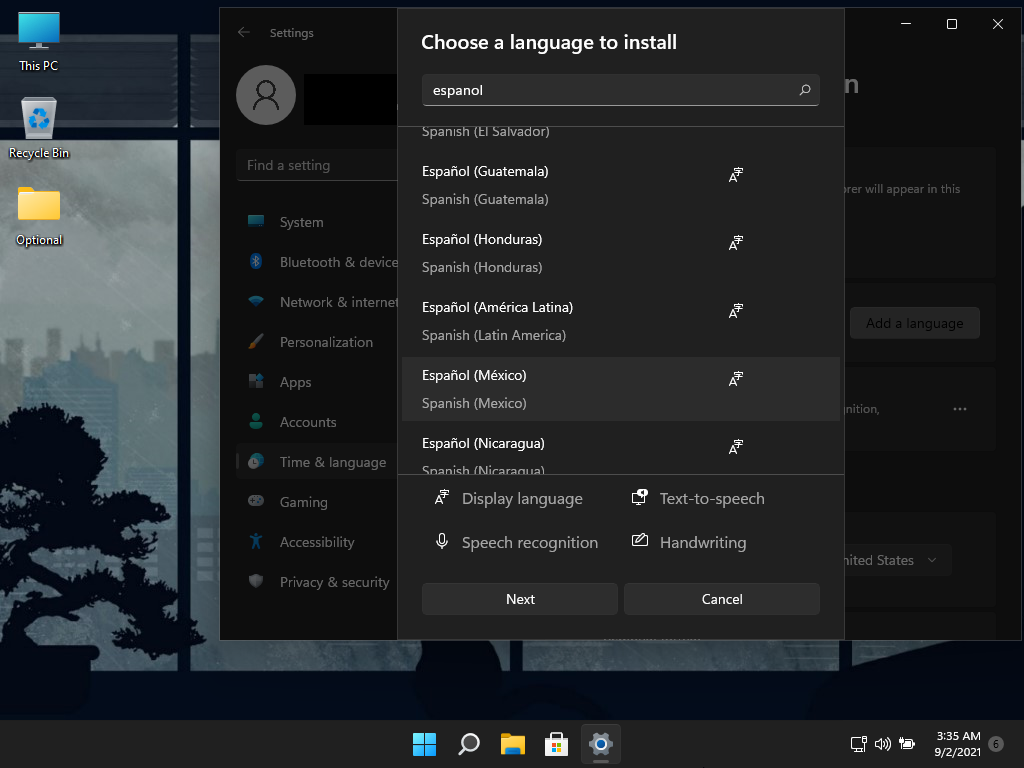 Step 3 (IMPORTANT)
DO NOT check the box 'Set as my Winodws display langauge', and click Install 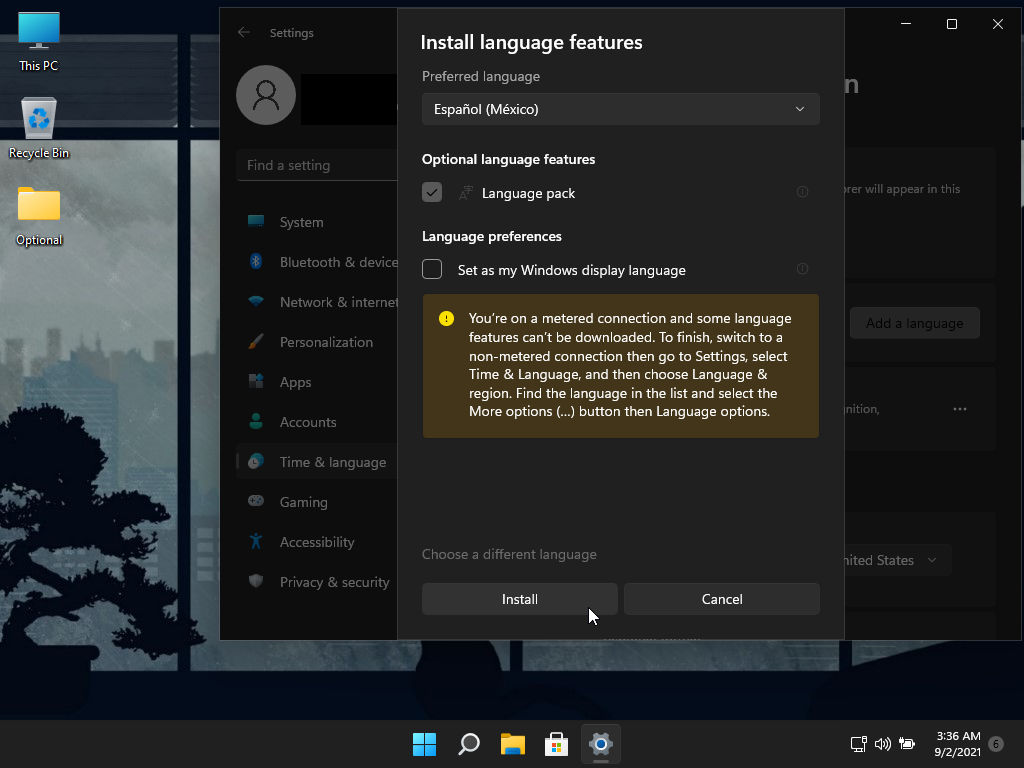 Step 4 (IMPORTANT)
After desired language pack(s) are installed, DO NOT set them as your Winodws Display language yet.
Reboot your PC first. After your PC has been rebooted, then you can proceed to change the Windows Display Language from English, to your desired language, followed by the Prompt to Sign out to apply language settings.

The Screen Shots below show I have 4 languages Installed. After following this tutorial, I was able to change languages, and restart my PC without any issues. 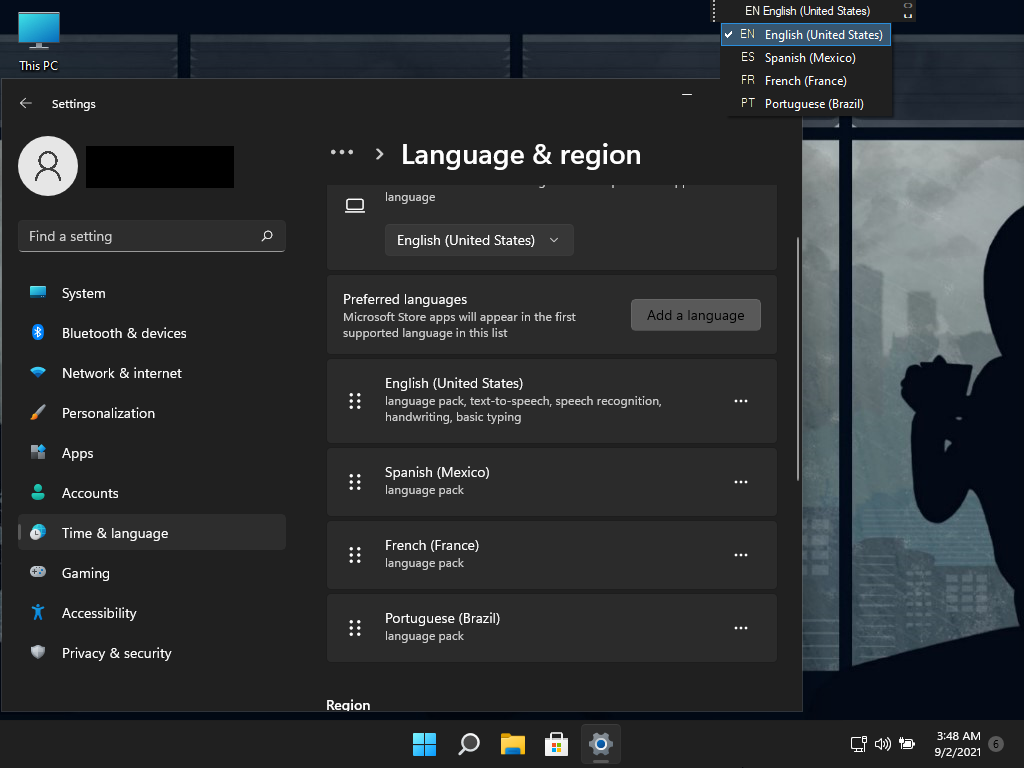 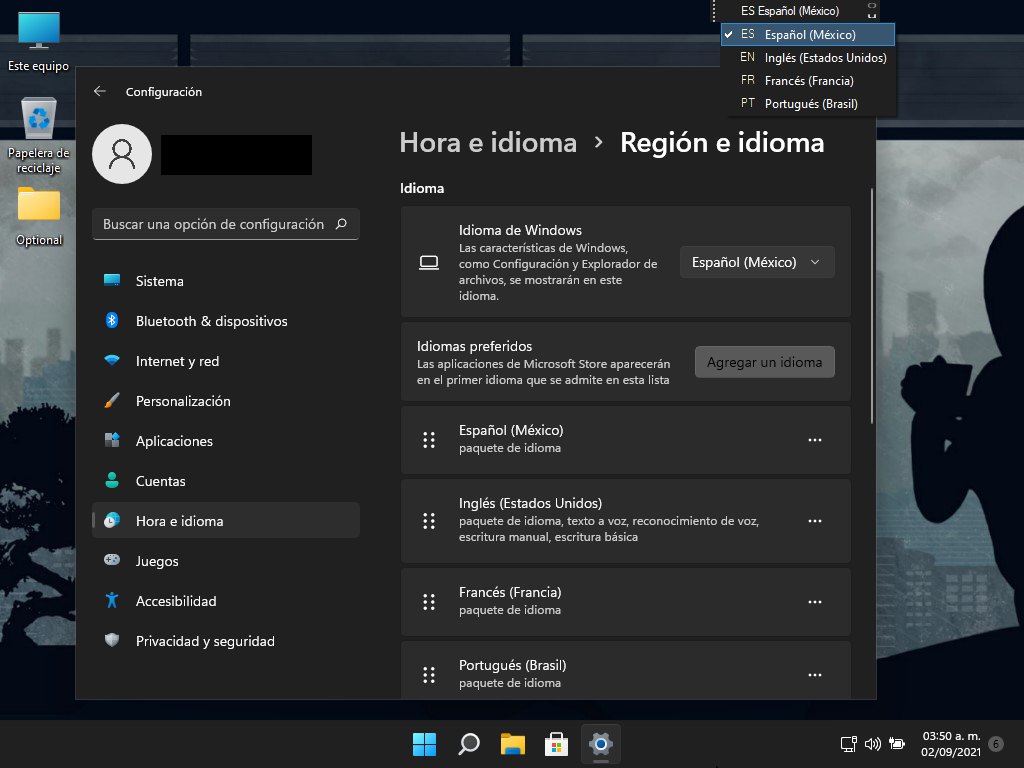 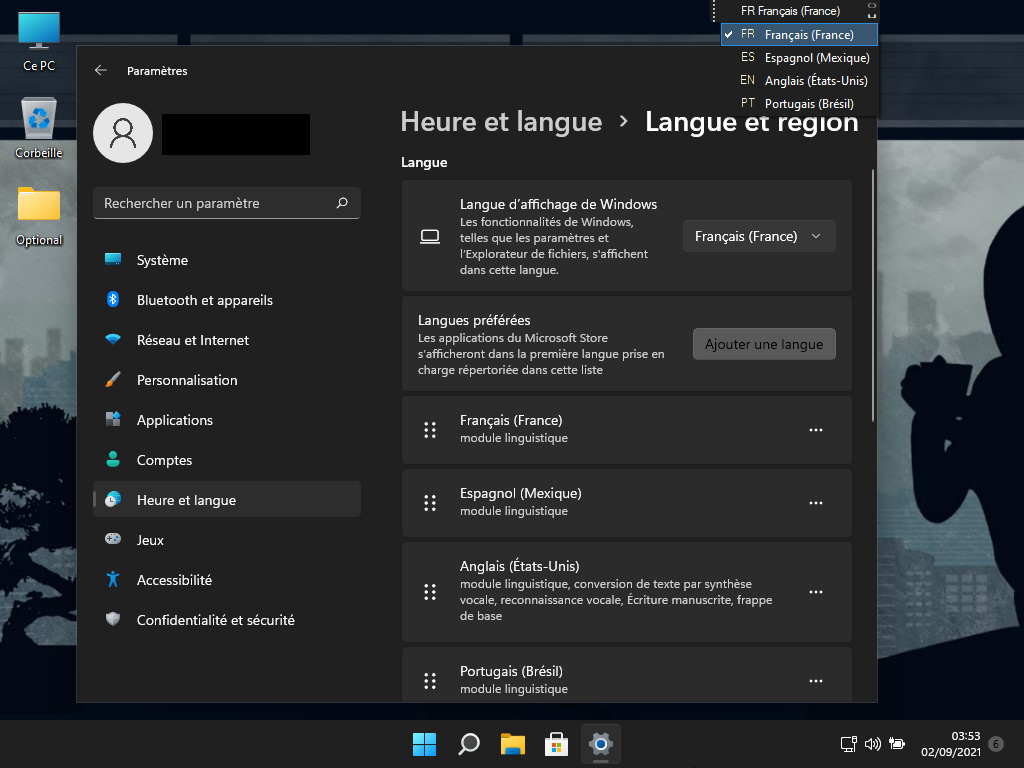 Now your PC will be able to safely shut down and restart without issues.
UPDATE!!
READ THIS TO FIX IF STILL GETTING ERRORS USING ABOVE METHOD!

If this method does not work for you, try the same steps above, but after Language Pack Installation is Complete, instead of Rebooting your PC, Force Shutdown your PC by holding down the power button, to bypass the Update, then Power on your PC to use. Or try the steps Below:​

You must be registered for see links
​
Part 2 - How to Turn on Hibernation in builds that have it Disabled! 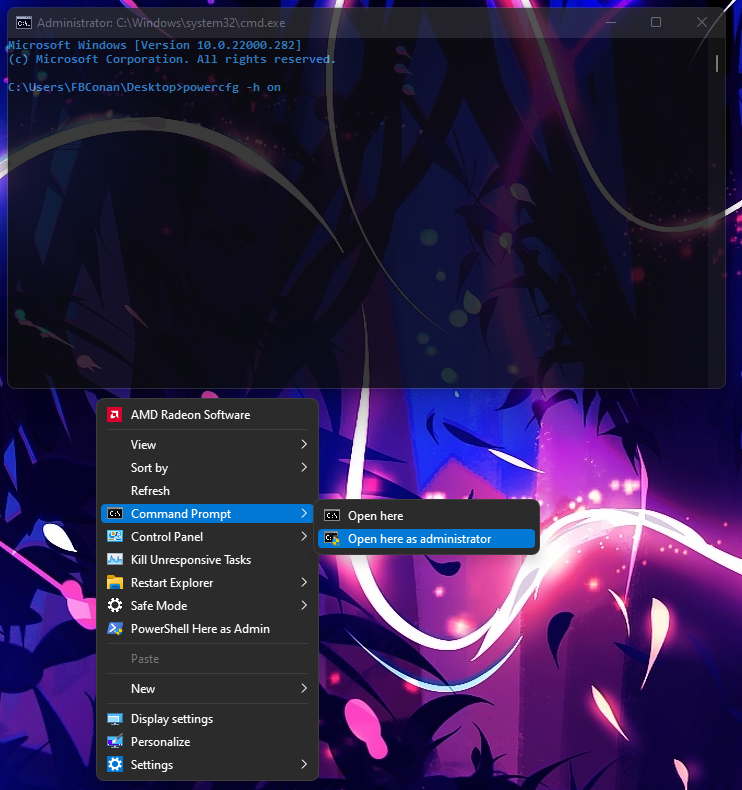 Step 2 - In Control Panel, Open 'Power Options', and click on 'Choose what closing the lid does'

Step 3 - Click on 'Change settings that are currently unavailable' 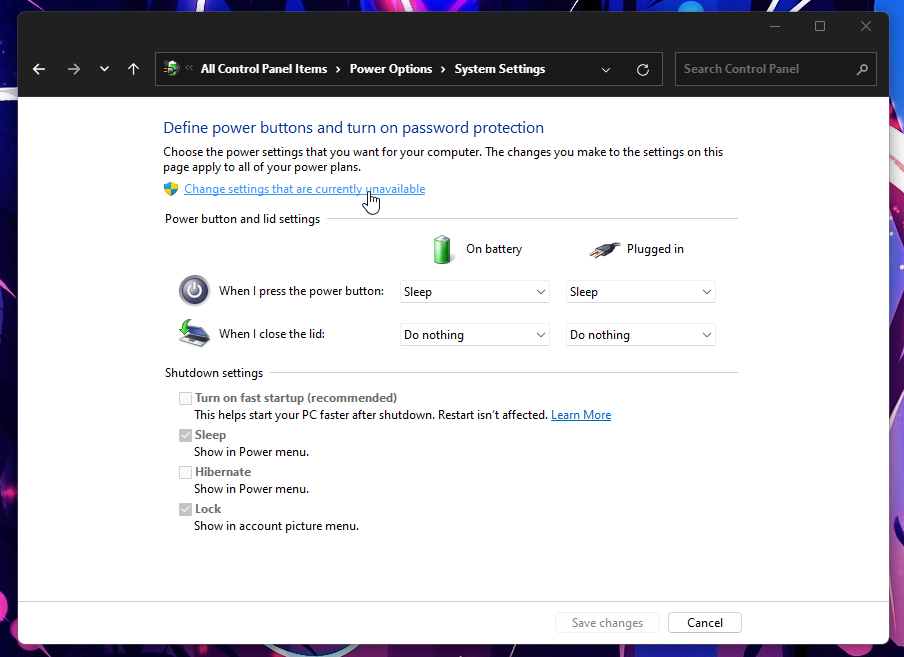 Step 4 - Click the 'Hibernate Box' and hit the 'Save Changes' Button, Hibernate option is now available in Shut Down Options 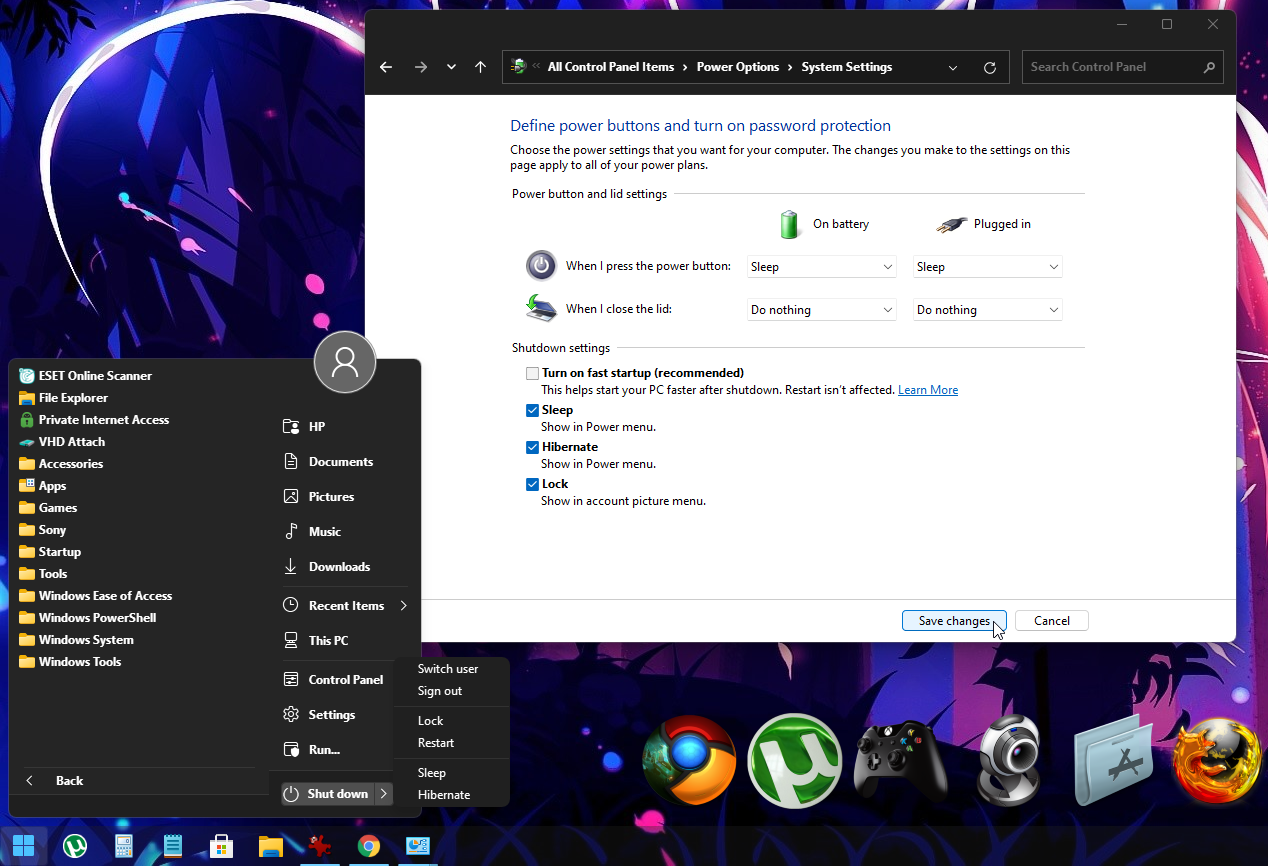 ​
Part 3 - How to Turn on Delivery Optimization Service!
*If it's disabled, some update features, XBOX games and app downloads might fail*


Step 1 - hit Win Key + R (Run) and type 'services.msc'
Locate the 'delivery optimization service' and look at the startup type.
If it says disabled, then keep reading to enable it, and get your ability to download xbox games, as well as some updates, features, and language options as well.

HKEY_LOCAL_MACHINE\SYSTEM\CurrentControlSet\Services\DoSvc
(and hit enter)
then, double click the 'Start' Entry in the Right hand pane
Change the number from 4, to 2, and click 'OK'
Changing the value from 4 to 2, will change the startup type for the Delivery service from disabled, to automatic. 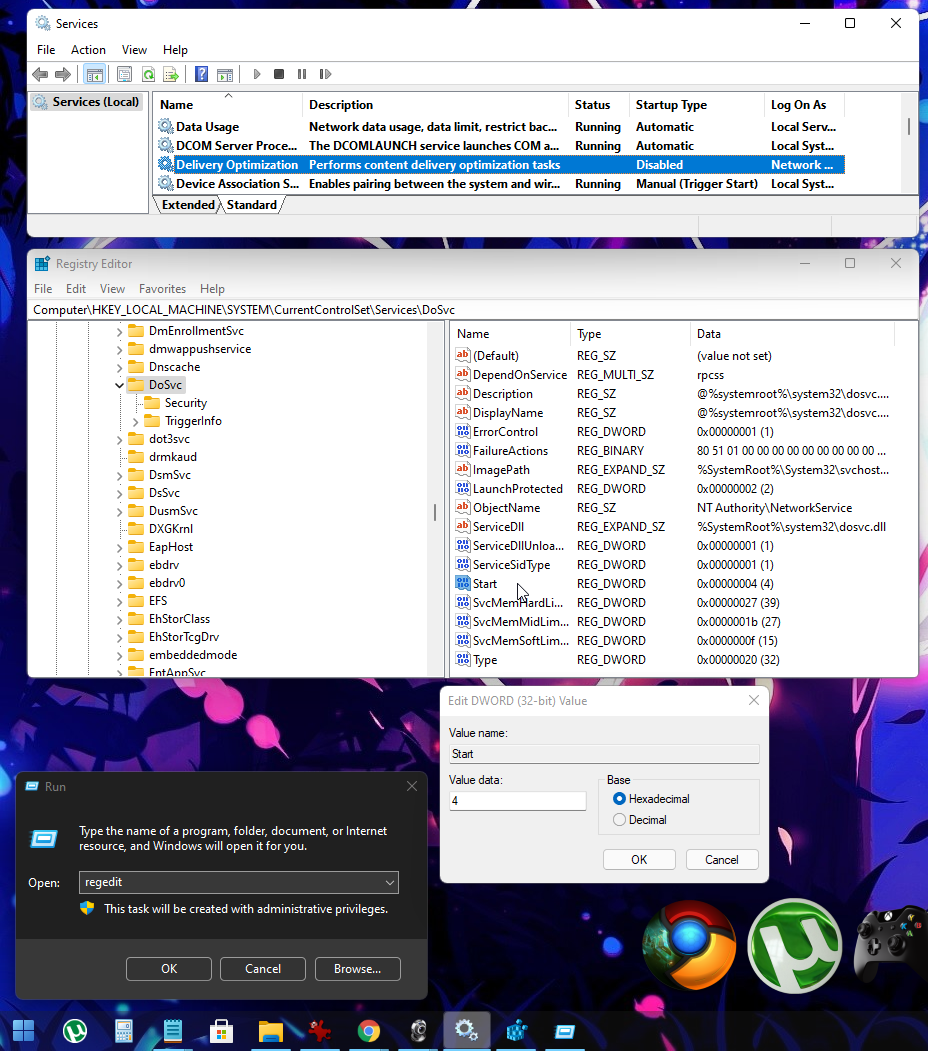 *LTSC builds DO NOT come with UWP Apps pre-installed, including the MS Store*
but you can Easily add it if you'd like to!


You must be registered for see links

Step 2 - Unzip the file to your desired location

Step 3 - Navigate to Folder where you unpacked the zip file,
Then right click on the file 'Add-Store.cmd' and Run as Administrator. The script will run, and do the rest for you. When complete, you will be able to use the Microsoft Store App on LTSC!
​
Part 5 - How to Enable Virtual Memory! (Paging File)

All of my custom light builds have virtual memory (paging file) disabled, but if you are running Apps / multiple apps that are exceeding your Physical Memory (RAM) limit, they will crash unexpectedly. - Enable Virtual Memory to Fix this Issue on your PC.


Step 1 - Right click Desktop, go to Control Panel, All Tasks (God Mode) then open the 'View Advanced Settings' shortcut (in the 'system' section), and a Window for 'System Properties' Settings will open. Click on the 'Advanced' Tab at the top. 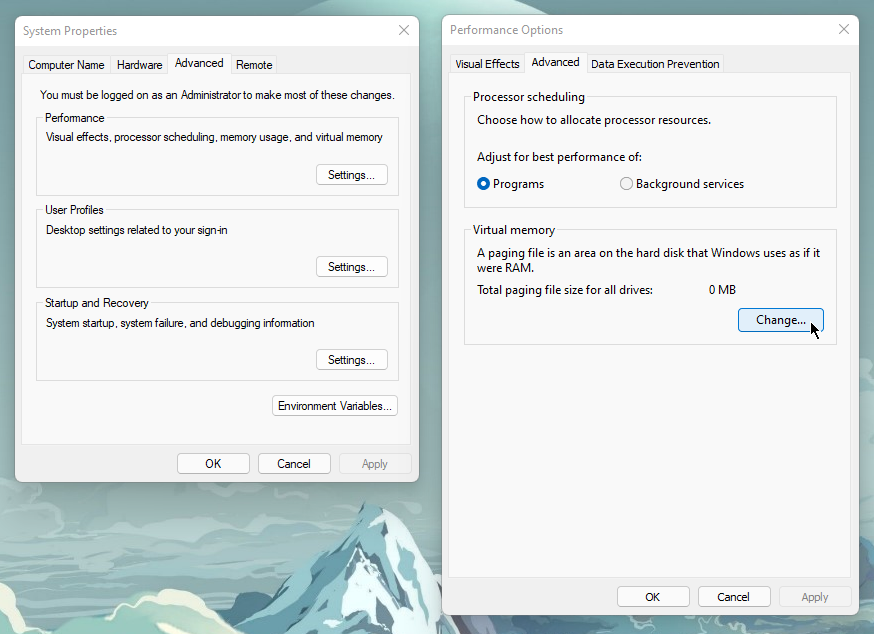 Step 3 - Click the 'System managed size' dot and then hit the 'Set' Button, to enable the recommended Virtual Memory size for your PC. You can also choose a custom size if you would like, but a system managed size should work fine for most users needs. 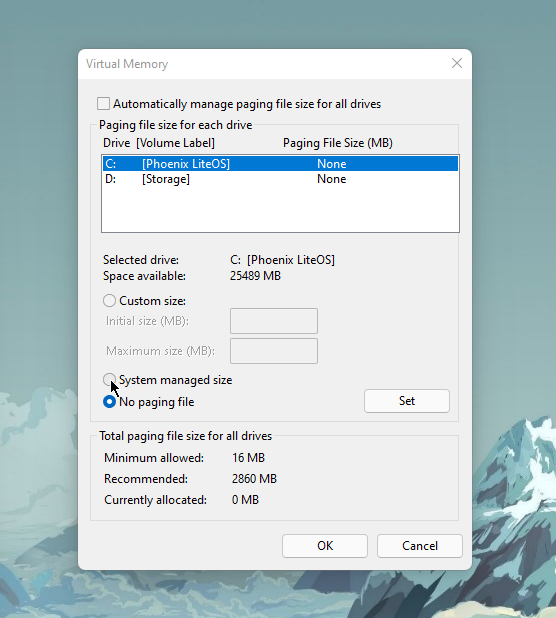 The most common fix for installing my builds, after you write the ISO to USB with Rufus, is to try different USB ports on your PC, if you are getting 'No Driver' Error.


The Windows Setup environment (boot.wim) in my releases is a basic, reduced version that saves hundreds of MB from the original MS boot.wim setup file.

Personally, I've never had a failed install, or setup issues on any of my PC's, ranging from 10 year old laptops, to brand new ones, with HDD, SSD, and NVMe Storage, AMD and Intel CPU's, and both MBR, and GPT partitioned drives.

For anyone who's having / had issues installing my builds! Read This! 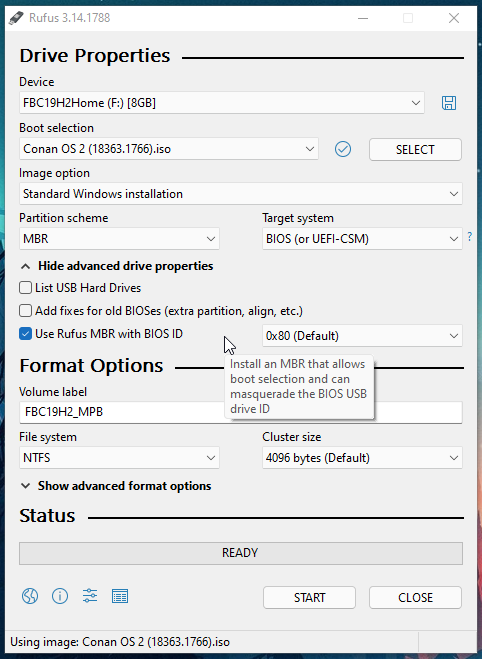 I can confirm, This works on both my BIOS, and UEFI systems, 10 years old, to brand new.
**Switch USB Ports if getting no driver error**

If it still doesn't work, you can download a stock win 10 iso using MS's media creation tool, open the iso from MS in poweriso, go into the sources folder, delete the 'install.esd' or 'install.wim' file. (but still keep the iso open in PowerISO)

You can drag files from File Explorer to PowerISO to copy over.

Here's a video to illustrate how to do this procedure:

►►
You must be registered for see links
◄◄
​
BONUS! - AMD Chipset Drivers

If you are having issues installing AMD Ryzen chipset drivers on your PC on my Windows 11 Builds, I recommend trying the ones I am providing here.

Member for 4 years
Oh my goodness. My problems have been solved. I thought I was just dumb, but this video made my life easier

I will refer users to this if I see them asking about languages or hibernation on your threads.
N

Member for 2 years
Just did what you instructed, and this is the error I've encountered so far 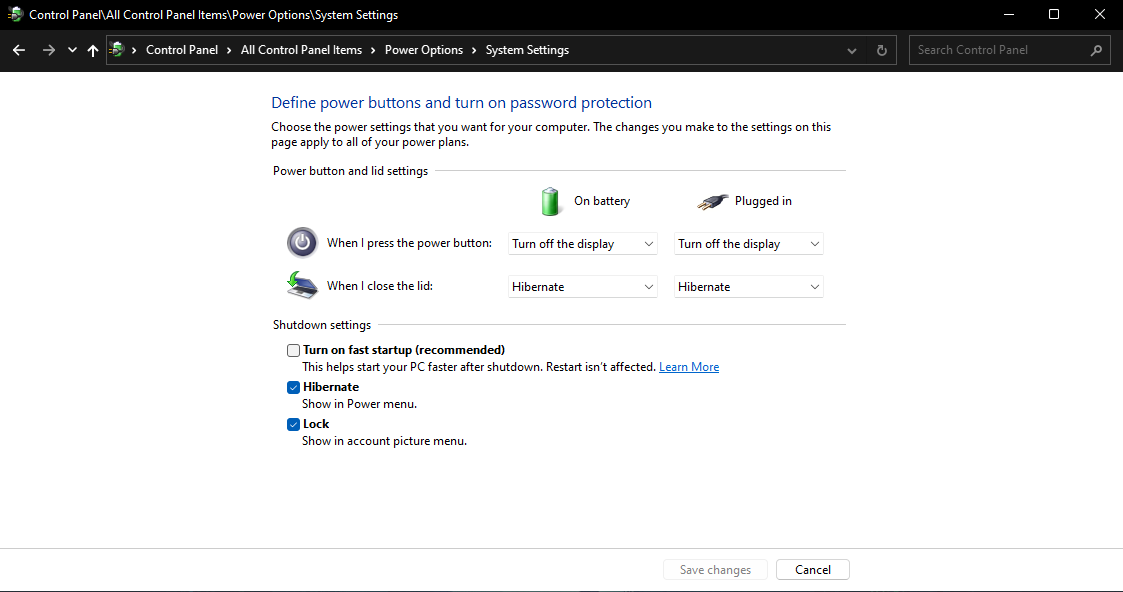 And the "Sleep" button doesn't allow me to click it. Awesome tutorial FBConan, very precise
and easy to follow. Thanks for posting it.

By the way, it's very nice to put a voice
to the name.

Member for 1 years
Excellent tutorial.
Is there a way to restore spatial audio ?

As most of the custom OS's here are LTSC - and very few are the NON variant.

Member for 9 years
Thank you for the information and tips you shared
Last edited by a moderator: Mar 1, 2022

Member for 7 years
Thank you for taking the time to make this tutorial.

Member for 3 years
thanks for step by step tutorial
T

Member for 1 years
Why some window go black after couple of seconds on background or when u minimize window or open game as other Windows user+ minimize it ?
how i can prevent it for some games, programs?
Last edited: Feb 6, 2022
A

Member for 1 years
issues i encountered with phoenix lite os 11:
stutter and lag , explorer crashes , games lag ( even tho i made a paging file ) , paint doens't work ( maybe deleted ? )
i feel like i'm going back to use a normal windows 10 or 11 and use all O&O shutup 10

Member for 4 years
Thank you, detailed directions that will be useful in the Phoenix builds
Y

Member for 4 years
On an older intel-based i5 Laptop, I faced installation issues and tried every single workaround which I had in my mind, to a point that I surrendered, And today I came across this thread that has a solution to all the problems I faced earlier. This is crazy stuff, I'm speechless and acknowledge that FBConan being the best author of the Windows assembly is actually a 'Windows Encyclopedia'........ People need to give these assemblies some serious recognition. ; )
W

Member for 1 years
I'll give you a BIG tip on the subject:

Windows, from release "8" (8, 8.1 etc) have a nasty backdoor that reactivates/resurrects WINDOWS UPDATE, and forces the system to update/upgrade, even if all the services are disabled.

That's why if you install a different language, the systema automatically SCREWS things up, EVEN IF all updates are disabled.

The files that are inside windows are sort fo "self-healing" and reactivate themselves at every reboot.

This way, m1cr0$0ft can arbitrarily make windows start an update without the users consent.

There is NO way to patch those file from windows. NO-WAY.

The ONLY working way to patch a a w10 system quiet/stable was found by a guy called Malte, that wrote a BASH script, a Linux script, that ERADICATES that nasty feature.

He called his version "ameliorated". His scripts are freely available.

It means that AFTER you have installed windows, made your customizations and all, you boot your computer via an USB key with Ubuntu 18.404 installed, mount the win10 partition somewhere, and launch his script. It will use fuzzy logic to seek&destroy all the SPYWARE crap into windows 10::

Look for it, it's called AMELIORATED win10/AME. ameliorated.info is the site, you may have to use telegram to get more info.

I used your "ultra lite win10 version" for a project, and it constantly reverted back the system automatically, after some time, it's UNNERVING.

After the Malte/AME script, everything is REALLY under my control, and the system FINALLY does not update by itself. It tries, but the files simply are NOT THERE, so the self-healing process of the m1cr0$0ft SPYWARE fails.

The CAN be other consequences, it's not a patch for the faint of heart, it's VERY experimental, bu it's the only KNOWN way to have a windows that is spyware-free, at least in the "updates" section.

I urge you to take a look at it, otherwise all those "enhanced/lite" versions WILL REVERT automatically into something else after some time.
G